There are so many stories about Lolo Tatay that I want to write down, and weave into a book. Tales of my small town farmer, who was, in reality, a big-time hero. Because it will take forever to write, I’ll do it in snippets. This is about his 1938 Dodge Plymouth.

Before the Japanese came, my grandfather had a car. He had a 1938 Dodge Plymouth.

Actually, after it arrived, the war had started – and so, they buried it underground. I will assume he kept it hidden so that it won’t be confiscated. I would like to imagine he buried it at the foot of Isarog, or maybe in the middle of Tambangan, or perhaps right in the poblacion, under the old house in San Antonio. He probably buried other things as well. He lost more precious things during the war – uncles and cousins. He also lost his liking for certain food he ate often. What was it? Potato? Carrots? (Lola confirms that it was carrots) 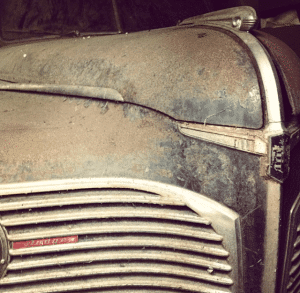 After the war, they dug out the car, and Lola says they were still able to use it after they had gotten married.

There was a story about a snake that decided to stay in it, and guard it from those who were up to no good. There was a man who had gotten hurt (was he a worker? was he hit by the car? I am not sure), and Lolo Papa (Omay Obias) was going to take him to the medicare in the poblacion. The supposedly hurt man was to ride the car, and Lolo Papa was going to make sure he got the proper medical attention. The limping man (Lola said the guy had a difficult time walking) rode the car, but saw that he had company – the snake had come out of his hiding place. And so the hurt man ran out, and was apparently not hurt at all. (I’m thanking Tito Don Patrocinio for that story).

So, different parts were borrowed, and it was kept in the bodega for years.

The cousins still dream of fixing it up some day. For the time being, it is parked more comfortably with Tita Asela Valencia-Florece and Tito Jun Florece, to be on display at Villa del Sur (a great place for reunions or just hanging out in Lagonoy). Perhaps, by the time it is returned to us, we’ll have enough money to fix her up the way Lolo would like. And perhaps, by that time, Tito Gil’s little museum / aparador of Lolo’s things will be a bit bigger too. 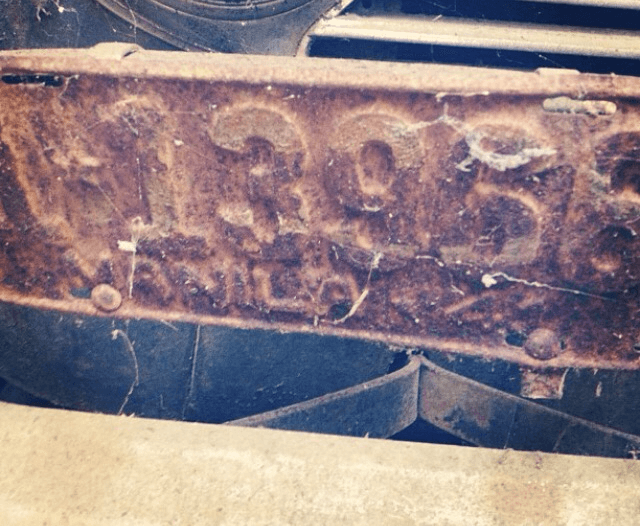 His license plate is still there.