More than ten years ago, the very first GK community in Bicol was built in Naga City. The first homes were built in Barangay Triangulo, in an area along the rail road tracks. Like most on-site builds, the homes were scattered in the PNR property, but at least, for the first time in their lives, these families had a bit more security. They had volunteers that had become friends go and check on them, share coffee with them, break bread with them.

Today, a handful of the original volunteers remain intact, continuing the work across the 32 sites of Camarines Sur, but this time, together with an empowered Kapitbahayan.

The strength of GK CamSur becomes evident during the annual Bayani Challenge. They are quick, efficient and full of energy. In their team is usually the youngest and the oldest volunteers on the build site. They are not only skilled, they are prepared (with food, cooking utensils, gasul and all the things necessary) to make their volunteers well-fed and as well-rested as possible. The team has mobilized themselves to serve in areas that need volunteers outside the province. They’ve gone to Camarines Norte, Albay, Masbate and Samar, with the team growing in number each time. More and more GK residents join as volunteers, building homes for others, just as others have built homes for them. 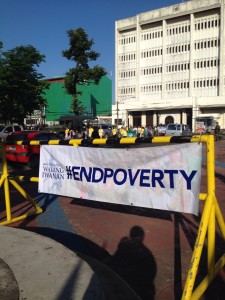 This year, in partnership with Naga City’s local government and the office of Congresswoman Leni Robredo, Team CamSur plays host for Bayani Challenge 2015. The preparations that Mayor John Bongat and his team have done make me proud of the city that I now call home.
The Facebook page of Naga Smiles used the hashtag #BawatNaguenoHero and I couldn’t agree more. Plaza Quezon was filled with them this morning. Mga buhay na bayani, ika nga ni Papa. 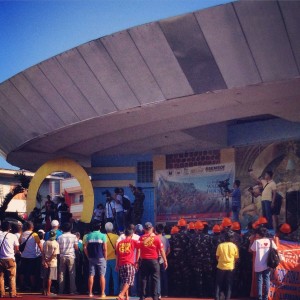 I see the Army, the BFP, the Police. I see the different barangays and GK residents. And I see a father and son tandem – serving together since ’07. Walang imposible ‘pag walang iwanan. Plaza Quezon, Naga City. Bayani Challenge 2015

The task of ending poverty is too great to do alone. But when you see members of the local government, volunteers of different groups, the armed forces, the police and firemen, the doctors and other professionals join in the mission, then truly, nothing is impossible.