Last week, we were invited to visit the home of Chelly’s paternal grandparents. Chelly said she wanted to show us an old bellfry within their property. Lagonoy’s ruins, her buried church, was in her backyard.

When we were still in the process of fixing our tours, particularly the pilgrimages of sacred spaces, we were told of an old bellfry in Lagonoy. It was what was left of the old Catholic Church before it was buried. I’m imagining it must have been swapped for the current location of the Catholic Church. There was someone who wanted us to incorporate the bellfry in the tours but nobody could give me additional information on it – just that it was on private property. I never forgot about it, but had to park it somewhere at the back of my mind.

Then, last Thursday, Chelly invited us over! I casually mentioned it to Lola (to let her know that we may be leaving her for the afternoon to visit some friends), and her face lit up. She wanted to go too. She has been hearing stories about the bellfry for a long time now and she wanted to see it. Of course, my parents (who had no idea that there was such an exciting structure hidden nearby) did not want to be left behind, so the whole barangay invaded the Ontengco home.

As we walked through the tall grass, Lola followed slowly, not once wanting to turn back. She really wanted to see it.

It was beautiful. And of course, for Tom, it was an adventure. He went up the steps and inside the bellfry – meeting bats and the other permanent residents of the ruins. And for Lola, it was a special stop for Visita Iglesia. It wasn’t the church where she was married – but it was a church she has been wondering about it since she was a girl. 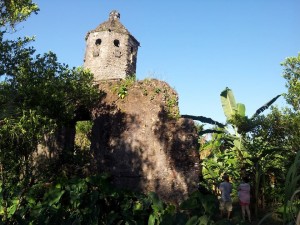 Long ago, the faith was shared within the now broken walls. Long ago, there was a bell that called the community to pray. Perhaps the great, great, great, great, great, great grandparents of Lola prayed there. The thought of such a connection excited me. For years, the subject of my study, interest and summer adventures has always been San Jose (I mean, I am SJForever), the church, the farms and the crazy family tree/jungle of my grandfather. It never occurred to me that Lola may want me to be just as enthusiastic of my Lagonoy roots as well. She has always been Mrs. Obias to me – I forget that she was once Ms. Valencia, a woman with her own land, house, degree and story.

I am so thankful that we were able to share this adventure together. It was an extra meaningful Visita Iglesia for us. Salamat, GP, Chelly, and Frankie for inviting us over! And to the very cool grandparents that accommodated our invasion.

And for our little ones, am hoping and praying these fieldtrips somehow find meaning in their hearts someday. Lagonoy is part of their heritage too, as is Goa, Lagonoy and Naga. 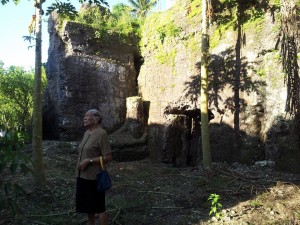 My happenin’ Lowla says she should have brought her trekking stick – but she did amazingly well without it.

According to Bicol Homepage:

“Lagonoy Church. Found in Lagonoy, Camarines Sur, the imposing ruins of the Lagonoy belfry is all that is left of the original stone church build in 1763. Abandoned after a great flood, the church was almost totally destroyed in 1811 by an earthquake. The “kampanario” is now covered with thick vines and guarded by a large snake, the “irago” (boa).”