Last night, we had a birthday party for Fr. Aba. He turned 34 yesterday – and today celebrates his 8th year as a priest. Yey for Fr. Aba.

Among the guests was my cousin, Tim. He’s my age, fresh out of college. Unlike a lot of my friends who are the neophyte slaves to the corporate world in busy Metro Manila, Tim was sent back to our sleepy little town in Bicol. His father runs the rural bank and has a bunch of farmland back here. Most of the time his parents are here, so I guess he was given the responsibility to learn the ropes and take care of everything here. Now, San Jose is great for summer vacation – but to actually live here? I don’t know…

To understand the situation better, let me describe our town and how our family is greatly intertwined with its history and progress.

Back in the day, a long long time ago, when there was still no San Jose, the parish priest of Lagonoy (the next town) decided to put up a beautiful church (and create another town). So he did. And in the process he had himself a loving local girl. You can just imagine what happened. If it wasn’t for my lolo priest, we wouldn’t have this quaint, little town…and I wouldn’t be here either.

So about 200 years later, the descendants of my lolo priest are still active in the town. The tiny, old women whose hands we put up to our foreheads hold real power in the town (debatable of course). San Jose reminds me of Noli Me Tangere. It is your average rural town, superficially democratic, but really neo-feudal. So small that the people who live in the poblacion are all related. The outskirts of the town are rice fields, forests, orchards. It is your little backward town, slowly creeping towards modernization, but in many ways still stuck in the 19th century.

And, in a selfish way, I love the way it is. I love having a place to hide, when the hustle and bustle of the city is too much. My lola’s house is the best retreat…I can just sit in the gazebo, surrounded by all the greens, lay in the hammock and stare into space. One can just drown in the peaceful environment – it’s wonderful. Summer vacations (or at least a few weeks of it) were always spent in San Jose. We would meet up with Tim and other cousins from Manila (who we would hardly see when we’re in the city) and just hang out, play cards, drink gin and look for stupid adventures. We would drive around town, with the windows down and the music blaring, racing on the empty streets. At midnight we would walk to the cemetery and scare ourselves silly. We would put up our own check points at 2 in the morning and stop the incoming vehicles. We walked around town like we owned the place, basking in the recognition we got because of who our grandparents are. Very childish – but incredibly fun.

Very few from my mother’s generation stayed on though. They were all Manila kids, and didn’t want to deal with the farms – they had their own careers and plans to pursue. They would come back for vacation (and bring us kids with them)… but there were a few that actually raised their children here. Most of those that did stay lived the lives of little kings. One of the few men that stayed on (well, he really went back and forth from Manila), and worked hard was Tito Teddy, Tim’s dad. And I am sure he expects the same of Tim.

Tim seems pretty sure that he will be spending the rest of his life here. And it saddens him that he won’t have any cousins to hang out with. Our summer vacations are over and in a few years, the rest of his cousins that do live here will be moving to the city in search for a better life. He will live the life of a farmer – awake at dawn, asleep by 7. He’s been doing that already for almost a year. He says it’s like rehab.

When it comes to San Jose, we’re both sentimental. We love this little town and the history it has. We feel like it’s our town, and that we have to take care of it. Tim is ready to settle down and live here… and I am incredibly impressed by his decision. He is sacrificing a whole lot for our little town.  I’m so proud of him. 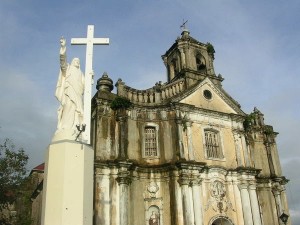 Two days ago, we thought typhoon Unding left the Partido area for the north. The signal number two storm, with rain and wind going at about 60 km/hour has come back – and is hitting us twice as hard – literally. At 120 km/hour, we have once again, lost our electricity.

Everybody says my mom and I are the jinx when it comes to these bad bad storms. Typhoon Rosing came when we were here, almost 10 years ago. We visited San Jose for All Souls Day, got caught in the typhoon and were stranded here for more than a week. There was no electricity, no cell sites, no telephone lines and the roads were all blocked because of the uprooted trees or broken bridges. I spent my days making little wax balls out of the candle drippings, playing solitaire or just staring outside the window. The rain and wind were so bad that we couldn’t even open the door.

This time, we thought the weather wasn’t going to be that bad. We were still able to go to the beach to watch the storm.

Tito Manny took us to his beach house, where we just sat in the little bahay kubo and watched the wind and the waves. It was beautiful… since it was low tide, the sea looked pretty calm, but the fog/rain/clouds were so dense that we couldn’t see the near by islands or the mountains on the other side of the coast. Every few minutes the Atulayan (an island around 30 minutes away) would peek out of the cloudy sky. After 30 minutes, the waves started getting stronger and higher. And the wind and rain started getting stronger too. We took it as a sign that we should stop our storm watching and head home before the rice paddies start overflowing onto the road.

I realized then that storms are just as beautiful to watch as calm shores.

The next day the weather was a lot nice… a rainbow appeared and we thought the storm had left us. We thought – hey, it wasn’t that bad. God, we were so wrong.

It is now 10:30 in the evening and I am typing on what is left of the battery in my laptop.

Typhoon Unding has come and gone and come again (which hardly ever happens… they say it happens once every ten years). It doesn’t only come back – it comes back with a vengeance.

As I type this, the storms rages on. Scary shit. Lightning and thunder too. Wah.

I can literally feel the roof above our heads shake each time the wind blows.

The household help are moving the bed away from the windows, afraid that the wind will shatter the glass. The outside kitchen (which is an inch or two lower than the rest of the house) is all flooded, with the crazy rain and wind bringing in tons of water… it is now flowing into the rest of the house and has already reached the bedroom.

Scary as it may be, I am nice and dry. I can’t imagine what is happening to all those who live in little cogon huts. Poor Goyo (the driver of my lola Mama) was supposed to have his birthday party tonight. Herac man. Hay, may God protect everybody tonight… and may this scary storm go away – for real.

rain, rain, go away… and it did… and the sky was beautiful… little did we know, the rain would be back… with wind and rain double the storm that left us.

~~ found this on my climb up ~~
http://windingstaircase.blogspot.com